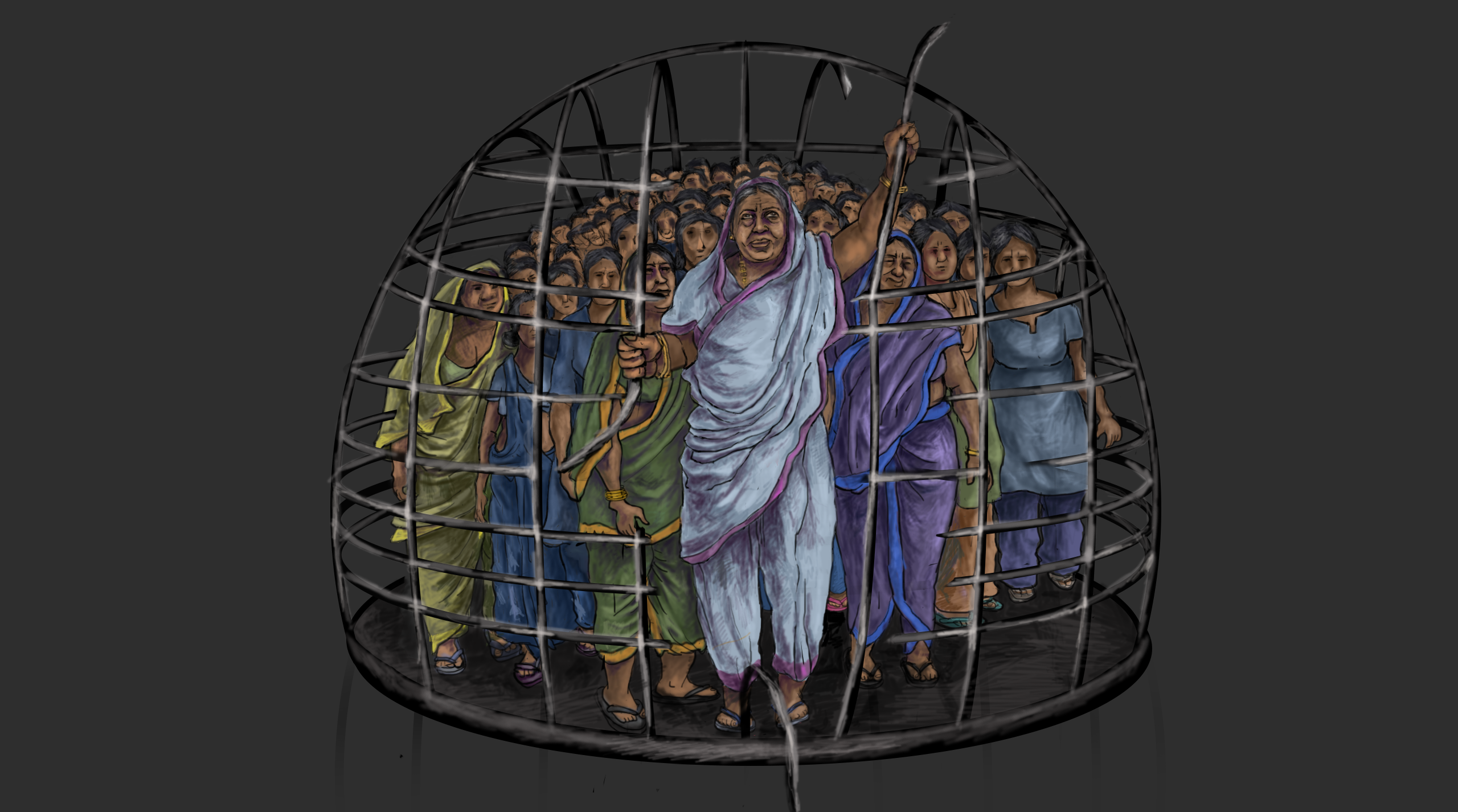 “I Wouldn’t Take No For An Answer”

How a solidarity-based sisterhood movement spread across rural India

Read this article in Hindi

“I can’t read and write, but I know how to fight legal cases,” says Akkatai Teli, now 67, a resident of Shirol region in the Kolhapur district of western India’s Maharashtra state.

Early in her life, people warned Akkatai to choose her battles wisely. Contrarily, she chose every struggle. Three decades later, in 2021, she says, "No woman should face what I have gone through, so I fight for everyone."

Akkatai has helped over 1000 rural women by bringing the perpetrators of domestic and sexual abuse to justice. This solidarity-based sisterhood movement has spread through fifty villages in western Maharashtra’s Kolhapur and Sangli districts.

Women in India face the most danger, statistically, from their own spouses and the families they marry into. Government statistics from 2019 show that 30% of reported crimes against women in India fell under the category “Cruelty by Husband or His Relatives”.

Compounding this danger is a legal system that moves at a snail’s pace, if crimes are reported at all. Akkatai’s story highlights how important social support is to overcome these barriers.

Her Call to Action

In the early 1990s, while selling fruits in the nearby Jaysingpur town, Akkatai Teli saw a grandmother weeping. Upon enquiring, she found that a resident had raped the woman’s five-year-old granddaughter. The past she was trying to forget stood in front of her. Akkatai rushed to a local official, a member of the legislative assembly from her constituency. “I told him about the case and asked him to phone the police.”

From her previous experiences, she knew approaching the police directly wouldn’t be helpful. But the elected politician was lackadaisical too. With no option left, she stormed the police station: “I wouldn’t take no for an answer.” To her surprise, the police did file a complaint and started an investigation. “The case lasted for five years, and the culprit was jailed per the civil court’s orders,” she says proudly.

This victory inspired Akkatai to start a movement.

The World Health Organisation states that globally one in three women has been subjected to violence. That’s roughly 736 million women. Akkatai wanted to change this using the power of solidarity.

She knew legal battles in India could take decades. The Indian judiciary ranks 69 amongst 128 countries in the World Justice project’s Rule of Law Index report, 2020. The country has 40 million pending court cases. Akkatai didn’t want to become another statistic.

“For two decades, he would beat me from midnight till morning. He murdered someone in the community and was jailed,” she says, “He even sold the kitchen utensils to buy alcohol.” Akkatai started working as a fruit vendor, farmworker and often doubled up as a labourer in a tobacco factory at the age of 12, only to have her bare-minimum earnings taken by Mahadev. “I have lost count of the number of times we slept on empty stomachs,” she says, referring to how Mahadev devastated not just Akkatai but the childhood of her two daughters.

Despite numerous attempts, she couldn’t return to her maternal home because of the social stigma associated with divorce and women who leave their marital homes. Even today Indian women are often told by their families and society that no matter how bad their marriage is they should stay in it till the end of their lives. For Akkatai, the violence stopped only after Mahadev died of alcoholism in the late 80s.

"This society has decided that women should face all kinds of atrocities. I wanted to change that."

Akkatai’s first encounter with the legal system began in 1990 when she couldn’t bear injustice anymore. “After Mahadev passed away, the violence stopped, but my in-laws had planned hell for me,” she remembers. They ended up selling Mahadev’s almost two-acre farm without Akkatai’s signature and consent. “I went to the police station, but no one helped me.”

Akkatai, who had not been educated beyond the first grade, faced immense challenges. “I walked into the Jaysingpur civil court alone.” The court officials informed her of a provision where the government could assign her a lawyer. The family sold the land to four different people to make matters more complicated, which meant fighting four community strongholds, who belonged to the privileged castes.

“Her determination and courage not only helped her win the property case, but also inspired several other women to come forward."

It took almost sixteen years to win her first case. “Things kept getting difficult, as the goons would threaten me physically and mentally even at 2 AM,” she says.

Akkatai also reached out to the local media. “The local coverage would inspire more women,” she remembers. “I want more women to come ahead and fight their battles using the power of solidarity.” It has helped her receive the support of at least fifty community women.

Whenever Akkatai gets a call from a survivor of domestic violence, she first comforts them. “At times when there’s a threat to a woman’s life, I even shelter her safely in my house,” she says.

In India, 77 percent of the women who face domestic and sexual violence never talk about it. To correct this, she has written her contact number on the wall outside her house. “My house is an SOS centre for women. I get calls from victims even at 2 am.”

Revealing her contact number has also led to her receiving death threats over the phone. “I don’t fear anything. I always sleep with a sickle beside me. Now many local people support my work,” she explains. She has also taken legal action against such threats.

The excuses for violence range from birthing a female child, dowry, alcoholism, the marital family’s disdain towards women, suspicion regarding extramarital affairs, women talking to neighbours or men outside the family, and many more.

Upon receiving a complaint, Akkatai visits the government’s special cell for women and children to register a complaint and obtain legal documents, which can be used in court.

“Each case takes at least eight to ten years,” she says. Talking about the challenges of the Indian judicial system in India, lawyer Gowthaman Ranganathan tells Unbias the News:

Judicial backlog is a persistent problem. Lack of judicial appointments and lack of infrastructure are two big reasons.

Nalini, a Delhi based lawyer, says: “I hear from my colleagues in district courts that judges too work amidst a lot of pressure, where someone would be trying to bribe them while another person would be threatening them.”

Meanwhile, the legal costs and the mental trauma often forces people to withdraw. “Not many people are aware of the legal remedies and their rights,” she adds.

This reminds her of Rekha Desai*, another woman she helped. Rekha states: “His family members lied to me and said that he was a bus conductor while he was a gambler.” Within a year of the marriage, she found out that her husband was having a relationship outside of the marriage. When she began confronting him, he resorted to physical violence. “For eight years, he abused and beat me. Even his family members would mentally harass me.”

When Rekha returned to her maternal home for a few days, she met Akkatai, who assured her safety. Before filing a complaint, Akkatai usually speaks to both the parties and only then proceeds. “Rekha’s husband threatened us, and even abused me, ” says Akkatai.

She began her preliminary investigation by talking to the villagers at length. “I found everything about his illicit affair, the gambling, and how he sought local politicians’ help to silence Rekha,” says Akkatai.

Before filing a case, Akkatai held multiple conversations with Rekha over two months. “We first filed a case in the civil court mentioning that Rekha was lied to, deceived, and that her husband physically and mentally abused her every day.” It took three years for the first verdict that came in Rekha’s favour. Rekha says, “The court ordered him to pay me INR 5000 [€ 57] monthly as interim maintenance amount.”

Rekha’s spouse contested it in the district court – 50 kilometers away from Rekha’s remote village. “Every month, there would be a hearing which would take at least eight hours,” she says. “Even this result came in my favour, and now the court fined him,” says Rekha. Her husband then roped in a few relatives trying to bribe Rekha into giving him a divorce. “What shocks me every time is how a man thinks he can decide everything,” says Akkatai.

So far, Rekha has visited multiple courts over 100 times across five years. Each hearing cost Rekha and Akkatai a day’s income.

Akkatai asked Rekha not to opt for divorce till the dues were settled. “The property is in her husband’s name. As per the law, even his wife and children have a say in it. How can we give up that right?” asks Akkatai. In India, there are no accurate datasets available on how much land women own. A 2018 state of the land report puts it at an average of 12.9 percent.

“He didn’t even pay the monthly maintenance the court asked him to. We won’t settle for a divorce,” says Akkatai. After fighting for several decades, she learned such legal complexities. “I would discuss with lawyers, ask them questions till the time it made sense to me,” says Akkatai of acquainting herself with the legal provisions.

“The day accessing the legal system becomes easier, you will see several women opting for divorce. Most of the marriages are going to collapse, and they should.”
Rekha, who has spent over eight years awaiting justice.

What Allies Can Do

Narayan Gaikwad, a 73-year-old farmer from Kolhapur’s Jambhali village, has seen Akkatai fight cases from the start. “With tremendous pressure and red-tapism, sometimes Akkatai loses her calm. That’s when I take the case forward,” he says. Narayan has helped Akkatai in several instances and ensured the local police at least registered the case.

Advocate Gowthaman Ranganathan believes it is important to remember the contribution of the feminist movement in getting legislation against domestic violence. Till then it was seen as something that happens within a man’s home and is personal. He agrees with the need for reform and better implementation:

“Laws can exist but it is the economic dependence that keeps women in violent situations. Judicial academies organise gender sensitivity training for officials but we can have more such workshops. Protection officers, appointed to support women facing abuse, need to be prompt and in accessible locations. So-called men’s rights’ movements are pushing the narrative that the law needs to be reversed because it is being misused. We need to counter that narrative too.”

Akkatai, who has spent her lifetime fighting, is not tired. “If I can just get the support of a woman lawyer, I can make the entire Kolhapur district safe for women,” she says.

Dig in on our stories.
Join to real conversations with the authors on:

* Names have been changed 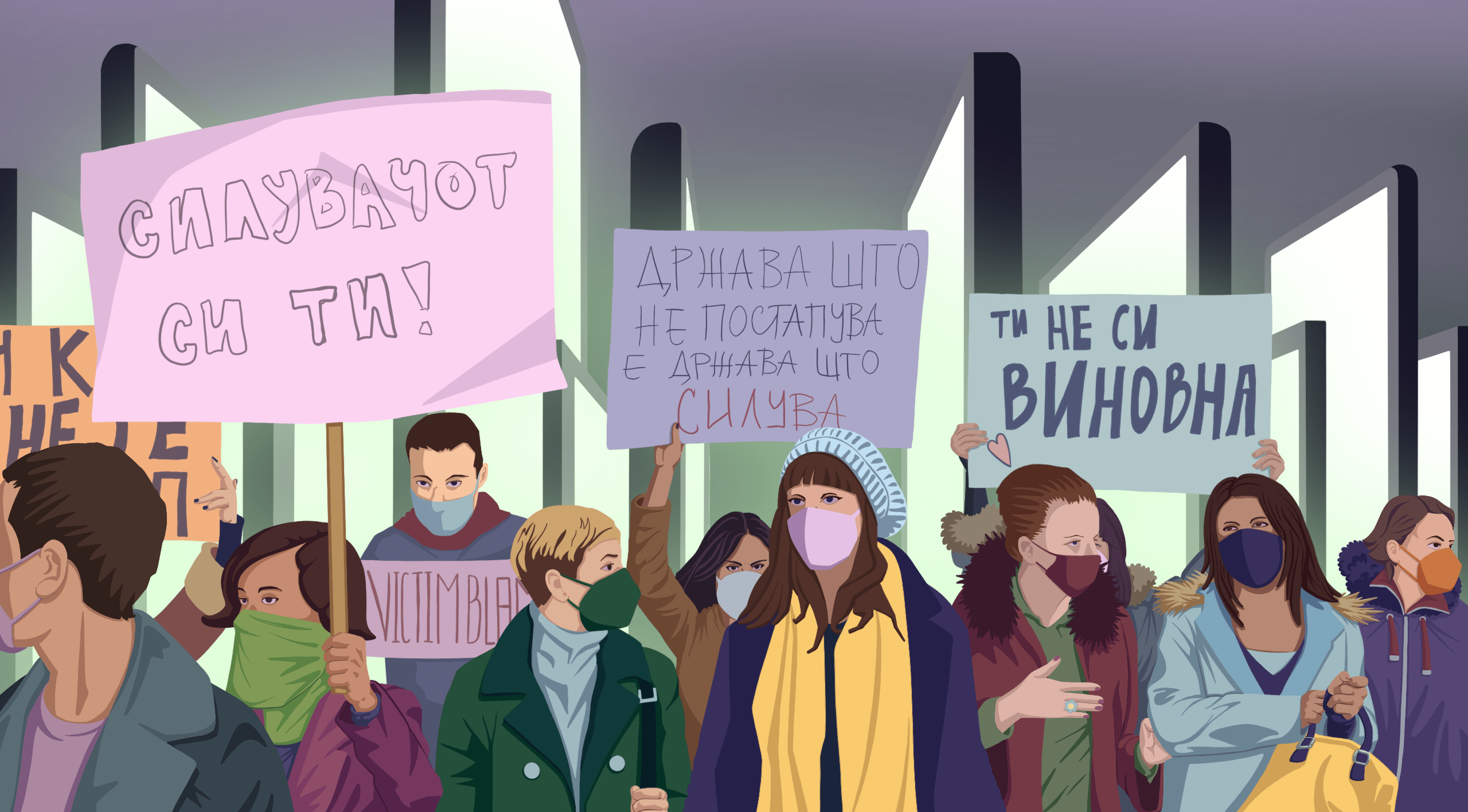 Is tech providing an invisible cloak for harassment?

Behind the scenes of our latest story: Editor Tina Lee looks at an epidemic of sexist harassment enabled by messaging apps and social media. 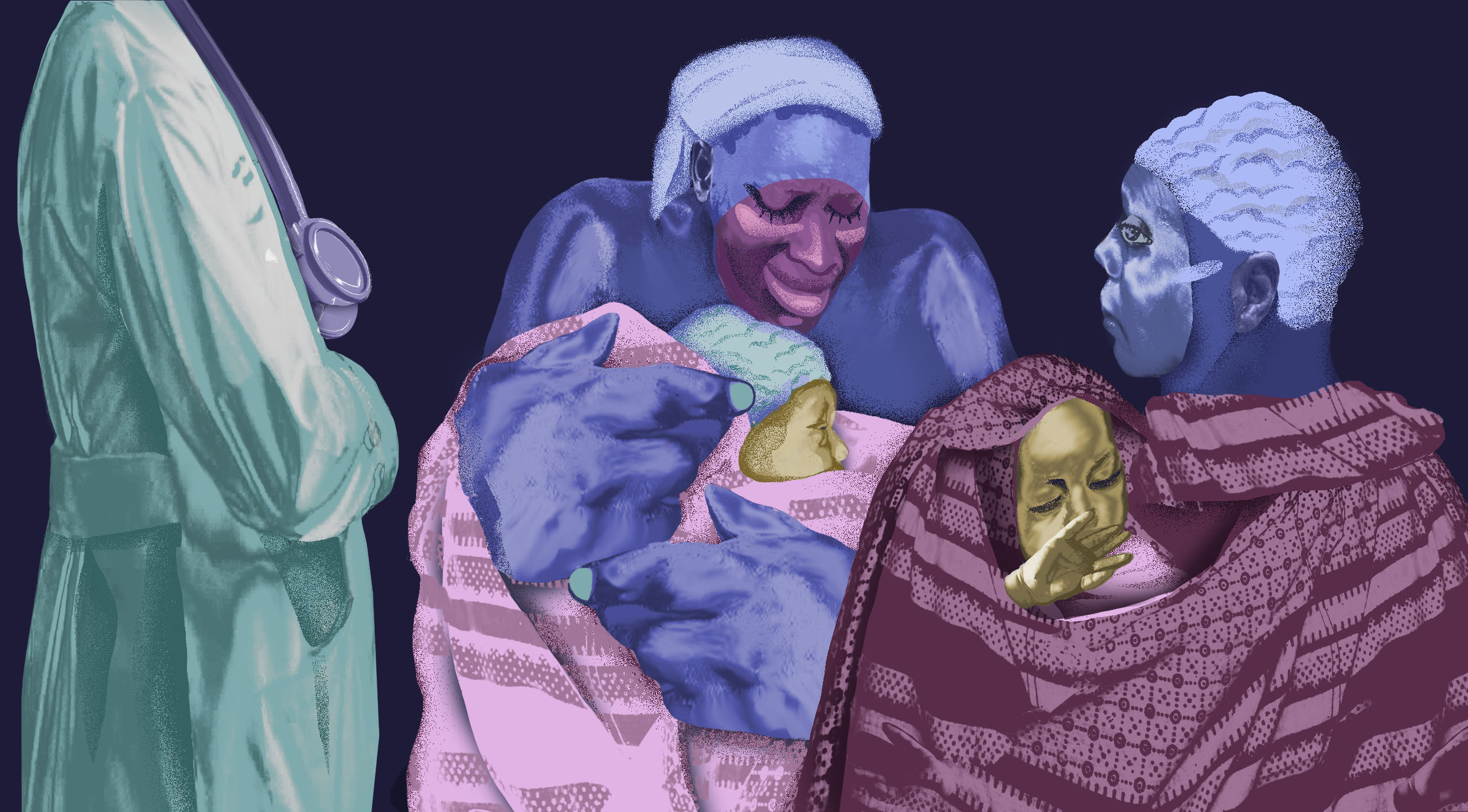 For some women, a different kind of pain during birth

Behind the scenes of our latest story: Editor Mercy Abang looks at an epidemic of maltreatment and substandard care that affects women during childbirth.

In 2013, the president of Kenya abolished hospital fees for giving birth. Almost a decade later, birth mortality rates remain stubbornly high. Does a pattern of abuse explain why? 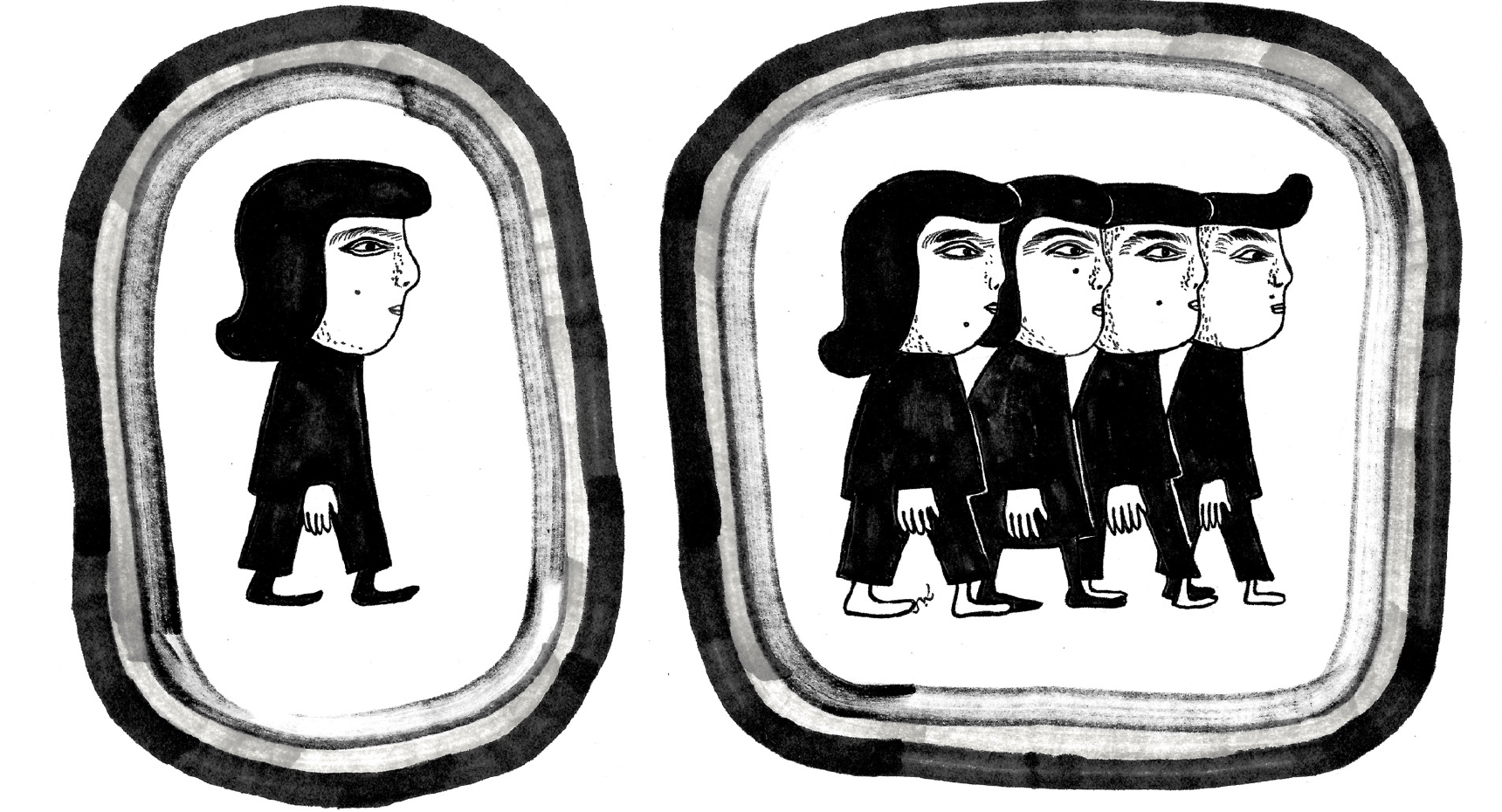 Press Freedom and the Indian Judiciary

While press freedom faces grave threats in India, the judiciary has pulled through to protect the constitution in even the toughest of times, argues Ankita Anand.