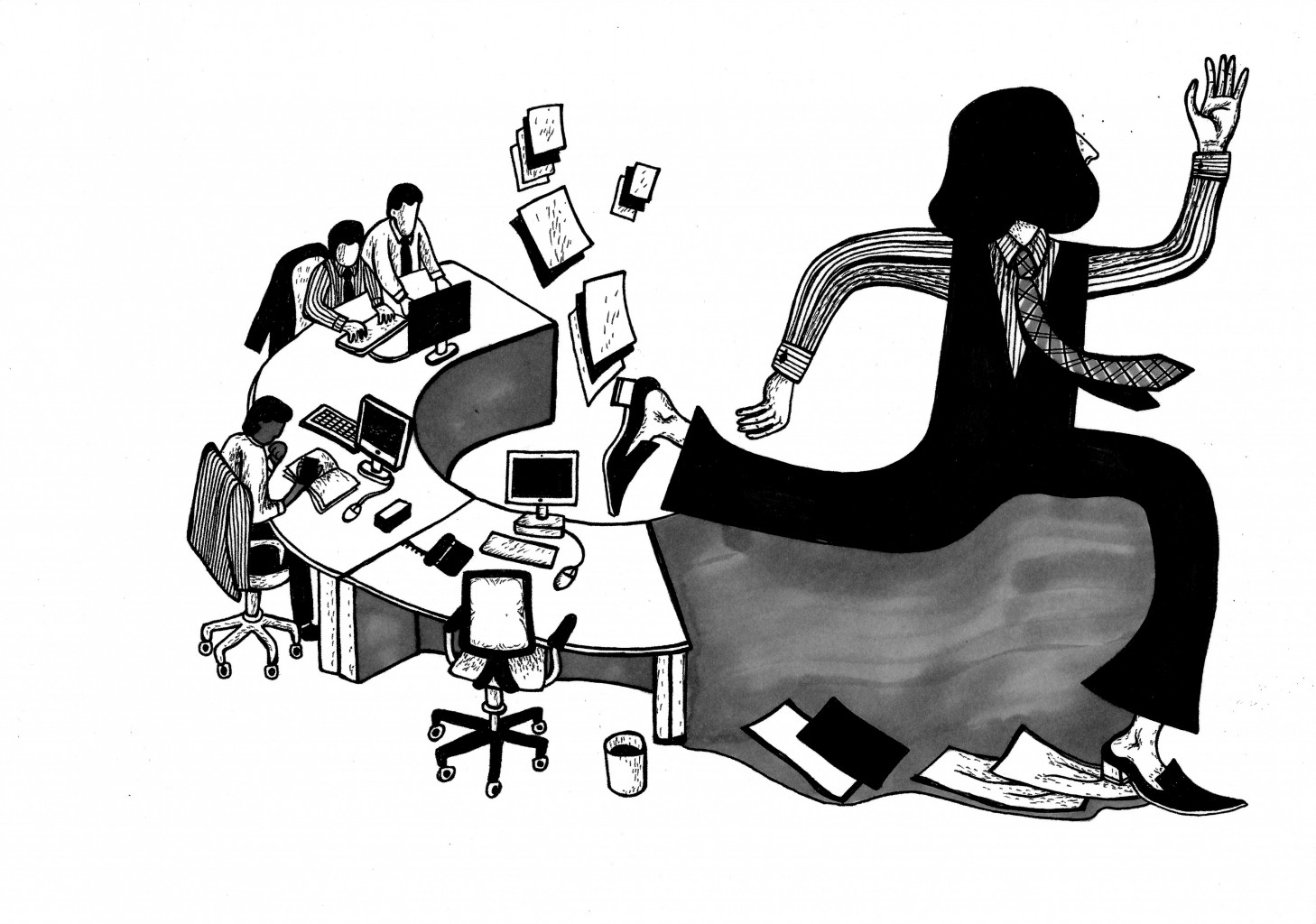 This article has been republished from Representology Issue Four, Winter 2022.

I learned English from TV, especially from the globally famous TV series, Friends. Thanks to Egypt, which doesn’t do television series dubbing in the same way that Germany does, I learned from the TV, because I couldn’t afford the money or the time to go to a private English institution to learn the language.

When I started learning German, I went to the most prestigious, most expensive institution, The Goethe Institute. The first class I attended was for free, as a gift for journalists, and then I continued to pay for my intensive course. I worked three jobs – I was a daily TV reporter in the morning; I created and headed an online department in the evening, and with the little time and energy I had left, also sold pieces for international media outlets. I was a single mother – an independent woman in what is a rough country for women, and a journalist with passion in a conflicted region, which didn’t make things easier.

I needed to hustle more and more in order to learn English, and I had to do the TEFL test twice, paying half a month of my income each time to learn, and prove that I had taken it. The Goethe Institute certificate was also valuable in my career, when I moved to work in Germany.

I believe languages are critical tools for journalists, so I always invest the time and money I can to improve them. Yet, neither the native English speakers nor the native German speakers in newsrooms see my investment as an achievement - there is always someone there who wants people like me to do more and to compete.

I’m writing this as a person who consistently raises the topic of diversity in newsrooms. Many colleagues in the industry advocate for this cause, hoping to create better journalism. We see some dimensions more clearly than others: ethnic diversity, gender and gender identity, disability, religion, sexual orientation, and age.

However, we often forget or delay discussing social background or class diversity. By class, here, I don’t mean it in any political sense – I mean a financial situation that may be a barrier for journalists in pursuing their work in the ways they wish to. Decision-makers in newsrooms tend not to open a discussion about it. Why? Because it is seen as shameful to talk about social or class background, or those that carry this burden are too busy making ends meet to talk about it. Maybe it’s because it has not become mainstream in diversity conversations yet.

Everyone in the newsroom wants to be recognised, broadly, as middle class. It makes it easier for the privileged ones, so they are not focused upon because of their privileges. They wish to be considered as having got to their positions on merit. Conversely, the underprivileged don’t want to be seen as less competent than their peers because they come from different backgrounds.

Some journalists have had to bring this up. The American former journalist, Carrington J. Tatum, decided to leave the profession at a young age when he was unable to afford to pay off his student debt. I quote here from an article written for the non-profit publication, MLK50: Justice Through Journalism.

My journalism degree was more expensive than my wealthier classmates' degrees because I couldn't afford to pay in cash. But that's a common theme with American systems. Poor people pay high prices. Rich people get discounts.

An award-winning European colleague told me a story that the most prestigious newspaper in his country offered him 40 euros per story when he used to work as a correspondent in a Middle Eastern country. After some time, he felt burned out and thought of leaving journalism. He left for a year and then returned to do some great investigative work.

When I used to work between Egypt and Europe, I was sometimes paid as low as 10% of what my colleagues working in the same job on the same stories in the same place were paid. I was paid differently because I carried a different passport. I was allowed only to be paid what they called “local fees”.

Moving to Germany didn’t allow for much improvement. I still live in a financially precarious situation as a journalist, along with others who are migrants, exiled, Black, people of color, LGBTQI+, single parents – the list is long.

The intersectionality of these factors could create the perfect conditions to report on ongoing social struggles. I, like others, have expressed fears to my colleagues that I’m considering leaving journalism. How many of us will quietly quit journalism because we can’t afford to be journalists?

I don’t like being considered a victim – I’m still privileged in many aspects of my life. I’ve got a university degree and grew up in a vast cosmopolitan city offering many ways to develop intellectually. My family supported me emotionally, as a passionate woman who wanted to travel and discover the world – something which is often not the case in Egypt where I’m from.

In my opinion, they are not represented. Being less financially or socially privileged is different from being an intellectual. Everyone can be an intellectual, but not everyone can make their way into newsrooms. This necessarily leads to a poor representation of segments of our audiences, telling their stories in shallow ways, without agency.

To become a journalist, you must afford the expenses of education, training, and, nowadays, technology. Navigating through unpaid or poorly paid internships, you are often only offered the possibility of being paid by exposure, AKA a byline, instead of cash. Since you are told to work for free to get your name on your own work, many editors and organisations habitually deny young journalists their dues.

The financially and socially privileged take up all the space to experiment, specialise, learn, train, and put prestigious institutions’ names on their CVs.

This tempts journalism’s decision-makers to hire and promote them, which in the end, keeps newsrooms homogeneous, resulting in a situation where only privileged people lead newsrooms. This makes it harder for journalists from non-traditional backgrounds to progress into decision-making positions.

Journalism across the world needs more funding. Some countries enjoy acceptable levels of financing and high freedom of expression, compared to others. Recently, German public broadcasting has been shaken by a corruption scandal, reviving interest in how the country’s broadcasters are funded. The Director of the Berlin broadcaster, RBB, was fired for reportedly using public funds to bankroll a lavish lifestyle, and it has been reported that some directors of the ARD broadcasting corporations receive a more lavish annual salary than the Federal Chancellor. So, maybe there is some money available, but we need transparency in order to understand whether or not it goes into journalism that serves the public interest. And, by the way, we also need more transparency in talking about salaries, because, in a country like Germany, where I practice journalism now, it is still taboo to speak openly with colleagues about our pay.

I followed with worry the situation when journalists at the BBC received the news that radio broadcasts in 10 languages, including Arabic, Persian, Chinese, and Bengali, would cease – although the BBC said no language services would close, and that many will move online. That still leaves the journalists in these departments confused and worried about their future.

In relation to the development and dissemination of programmes, imagery, or digital media, we must remember that journalists are the catalysts of the future of information. Investing in human resources is the most essential investment that newsrooms can make.

In many newsrooms, underprivileged journalists are put under immense pressure to compete. They are challenged and told that they need to learn more and do more to keep up with their competitors. Those who can’t, or who don’t want to compete, are shamed or called lazy. Some talk about ‘equality of opportunity’ – in other words, compete with others if you want to be recognised. They forget the vast difference between equality and equity. Equality in running a marathon is giving everyone the same pair of shoes, while equity is giving everyone a pair of shoes that fit.

It is also about the ground we stand on. The discrimination, oppression, marginalisation of the socially and financially unprivileged, which make us stand on unequal ground.

The competition culture in newsrooms has replaced a collaboration culture over the years. To fit the vision of often white, patriarchal, and economically privileged-led newsrooms, less privileged journalists have had to sacrifice who they are, sitting in underfunded newsrooms far away or overseas.

Competition might cause conflict on earth, but collaborative journalism may well be its resolution.

Wafaa Albadry is a journalist based in Berlin who works at Deutsche Welle and contributes as a regional editor at Unbias The News. This piece is inspired by her talk at International Journalism Week 2022.

Please consider a donation to support the work of our newsroom. We create a space for journalists facing structural barriers, working towards a more equitable, inclusive world of journalism. Join our mission today!

More articlesDispatch from the womb of storms: Cop27 and the reality of loss and damage in the Caribbean 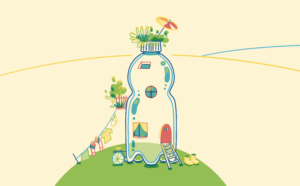 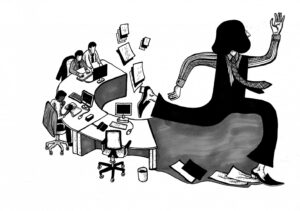 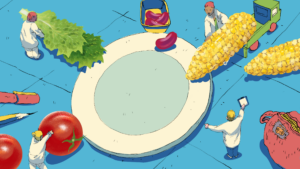